Distinguished members of the Peacebuilding Commission Configuration for Liberia,

The Honourable Minister of Internal Affairs,

Excellencies, Members of the Diplomatic and Counselor Corps in New York and Liberia,

UN colleagues both in NY and here in Liberia

While the challenge of managing diversity has been on the Liberian agenda historically, the specific focus of social cohesion has been accentuated by the release of the Truth and Reconciliation Commission’s (TRC) report in 2009, which, among other proposals, recommended repairing broken communities – those bridges which were virtually as well as physically destroyed by the two civil wars in Liberia.

The United Nations is grateful to the PBC for engaging us on the challenge of social cohesion because indeed despite some progress, much more needs to be done to tackle root causes and the drivers of the violent conflict comprehensively, and ultimately strengthen social cohesion.

I therefore commend the Chair, Her Excellency Ms. Anna Karin Eneström, Permanent Representative of Sweden to the United Nations (UN), and to all the members of the Configuration, for bringing additional focus to an issue that continues to raise hope and but also residual anxiety.

Post-conflict Liberia and post-UNMIL has shown that social cohesion in Liberia is thwarted by social divisions triggered by income gaps, ethnicity, religion, politics, status, language, gender differences or a combination of these and other demographic variables. Questions have also been raised about the Liberianess of certain identities - just as they have been for other entities in neighbouring Cote d’Ivoire and elsewhere with dire consequences.

Meanwhile, we are cognizant that the challenges of a highly centralised and limited and unequal service delivery, despite the very strong work on decentralisation and passage of the Local Government Act led by Minister Sirleaf.

A 2020 UNDP Assessment of COVID-19 Impact showed that the pandemic has also accentuated existing tensions in the country, including as a result of the pandemic’s substantial impact on economically vulnerable groups, such as slum dwellers and unemployed youth, further undermining trust in the government.

Improving social cohesion in Liberia requires a long-term vision and commitment. Liberia has adopted several national strategies that advance the implementation of the TRC recommendations. Foremost among these are the Strategic Roadmap for National Healing, Peacebuilding and Reconciliation (often referred simply as the Roadmap). However, we should mindful that the Roadmap is merely a blueprint for national reconciliation. A robust government-led process must guide the development of a more integrated and effective reconciliation strategic framework, which would articulate the principles of engagement that will guide implementation and coordination, delineate accountabilities, budget costs, establish the ways & means for monitoring and tracking results and finally also contain an account of how management/coordinating structure will deliver against the framework.

This robust government-led peacebuilding process would provide an opportunity to establish a more broadly-based peacebuilding momentum. And to avoid a an excessively ‘projectised’ approach to peacebuilding which is unlikely, as we know, to result in sustainable peace. We must explore more fully the interdependence between income distribution, ethnic identity, economic development, and social conflict and, as the Honourable Minister mentioned benefit from the potential of a regional approach.

The United Nations Peacebuilding Fund has certainly played its part over the years in helping to lay the foundations of progress for peacebuilding in this respect and has achieved impact in mitigating land concession conflicts, national reconciliation and social cohesion, security sector reform, human rights, gender and women’s empowerment. And I particularly wish to highlight crucial PBF support in promoting community-based healing and reconciliation through the palava hut process, which is an inclusive and participatory constitutional reform process, strengthening and institutionalizing on-the-ground capacity of local peace structures. And we think this is in our view a direction in which peacebuilding also increasingly needs to go.

The PBF’s recent endorsement of projects to strengthen women’s political participation and peace dividends respectively is strategic in sustaining Liberia’s peace and enhancing the socio-economic conditions of local communities, in the face of limited livelihood options exacerbated by the pandemic.

As we have said, strengthening social cohesion in Liberia requires a longer-term vision and commitment. Celebrating each identity group’s distinctiveness while attempting to build a ‘nation of nations’ is more likely to succeed in our view through dedicated national efforts and tapping into South-South co-operation. Fostering strong “we” feelings through various educational, sports, and cultural programmes can foster complementary or multiple cultural identities that strengthen national bonds and diminish intergroup frictions in the same process.

Advancing critical reforms such as decentralization and constitutional reform would promote equitable, transparent and accountable governance and enhance the delivery of services, as could attempts to institutionalise the principle character of fairness and the equitable distribution of public posts, public goods and infrastructure and build a strong unified national identity that embraces the narratives, the symbols and the aspirations of all ethnic communities, which we know can take generations.

Fostering social cohesion also calls for removing the spread of factually wrong information by the media, which often feeds into divisive stereotypes, especially as the country approaches national elections. This is evidently a difficult task, because of the possibility of endangering freedom of expression and because individual judgement is often affected by values and stereotypical beliefs. But is a task which certainly requires further consideration.

Efforts are underway to enhance women’s economic and political empowerment and more needs to be done on this to strengthen social cohesion. We paid considerable attention in the previous Liberia Configuration meeting to a proposed quota for female candidates in Liberian elections and this of course needs to be followed-up. But also promoting widely-based programmes that advance young people’s political and civil participation and rights and economic productivity is another area requiring attention to avoid the unravelling of peace gains made so far.

The Government may wish to take the opportunity to reinforce social and economic policies to ensure that all citizens have a voice, by fostering civic participation and strengthening democratic institutions especially at the local level. Furthermore, promoting social cohesion would require the joint involvement and active collaboration of all stakeholders of the society – of government, of business, civil society and others to jointly address collective action, in a coordinated manner. In many cases civil society and bottom-up initiatives should take center stage, while the Government takes on a subsidiary facilitating role only. And addressing the TRC recommendations also remains on the to-do list.

Finally, adequate and sustained funding, through a robust resource mobilisation strategy blending public, private, international and national funding, is critical to achieve the intended objectives and targets to ensure stabilization. In this regard, I commend the Configuration’s consultations with the International Financial Institutions last month, to explore ways of strengthening joint engagement, analysis and longer-term planning in the context of PBC support to Liberia.

I would like to conclude by underscoring that Liberia has begun its long journey to national reconciliation and social cohesion and this will continue for many years to come. The United Nations in Liberia looks forward to working with the Government of Liberia and through the Peacebuilding Commission to advance these and other priorities.

I can certainly confirm our commitment to the Configuration to continue to bring a strategic approach and coherence to international peacebuilding efforts in support of the peacebuilding and development priorities of the Government and to remain seized of the electoral process, and its potential to trigger and escalate conflict if not managed properly.

With these considerable challenges in mind, may I return the floor to you Madam Chair and thank you for your kind attention. 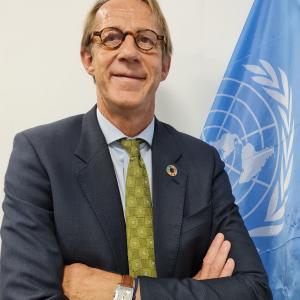