The Monrovia Metropolitan Climate Resilience Project (MMCRP) is being undertaken with support from UNDP and funding from the Green Climate Fund.

The Monrovia Metropolitan Climate Resilience Project (MMCRP), being undertaken with support from UNDP and funding from the Green Climate Fund, is aimed at protecting the lives, homes and livelihood activities of hundreds of families in the township, as well as critical infrastructure such as schools and fish landing beaches.

The people of West Point try to stave off the ever-advancing ocean using sand bags and garbage mounds that are often quickly over run and washed away by the ocean, leaving their homes vulnerable and precariously positioned.

“To protect our people from the existential risks posed by the climate crisis, this project will expand our coastal defenses, enhance livelihoods, create new economic opportunities, and improve the protection of the vulnerable mangrove ecosystems in the Monrovian metropolitan area,” said Professor Wilson K. Tarpeh, Executive Director of Liberia’s Environmental Protection Agency.

Coastal erosion as a result of climate-induced rises in sea levels and intense tropical storms has already permanently destroyed the homes of more than 670 families, and put critical fishery businesses at risk in West Point. It is estimated that Liberia’s economy will incur between US$40m and US$48m in climate change-related damages by the year 2100, adversely impacting tens of thousands of people.

“For the people in Liberia, climate change is a catastrophic reality that is literally eating up the ground from beneath their feet, and right before their eyes, plunging them into an uncertain future. We are doing our part to support the Government of Liberia as a matter urgency, to prevent further loss of homes and livelihoods. It is imperative for everyone – governments, businesses, industry, and communities, to reduce greenhouse gas emissions that are driving global warming and sea-level rises such as we are witnessing in Liberia,” said Stephen Rodriques, UNDP’s Resident Representative in Liberia.

UNDP, working with Liberia’s Environment Protection Agency, has secured US$25.6 million from the Green Climate Fund to implement the six-year MMCRP project that will impact 250,000 vulnerable people. The project will not only build the coastal defense structures, but also promote climate-resilient livelihood initiatives to redress encroachment and destruction the Mesurado Wetlands that drain into the Atlantic Ocean through Monrovia. The wetlands are heavily harvested for fuel wood, and are a chocking catchment for garbage.

The project builds on UNDP’s long-standing commitment to support the Government of Liberia’s response to the climate crisis. In 2020, the organization invested US$ 2.0 million for construction of coastal revetments in New Kru Town, also in Monrovia, saving the only government school in the borough, the D. Tweh High School, and homes.  UNDP previously supported the construction of more coastal revetments in Buchanan city, Grand Bassa County, to the south of Monrovia, at a cost of US$ 2.9 million.

UNDP is also at advanced stages of developing a similar project for Greenville, the capital of Sinoe County at a cost of US$8.9 million. Coastal erosion has already eaten away one of Greenville’s main streets.

Nine out of Liberia’s fifteen counties are suffering the effects of coastal erosion. 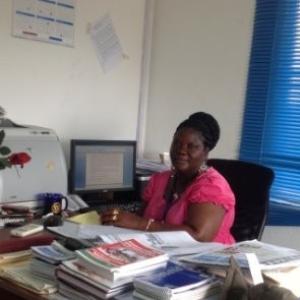